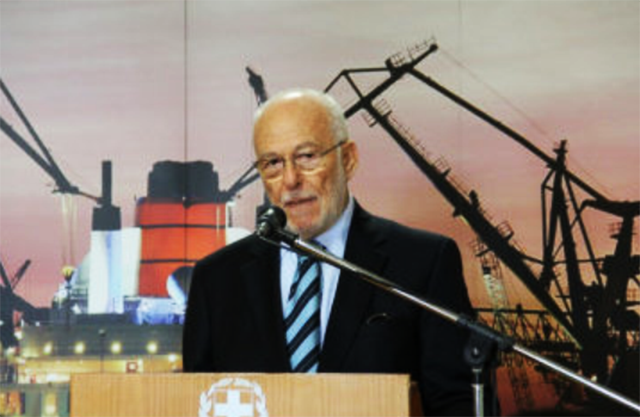 HELMEPA’s Exhibition titled “Marine Environment – Shipping – Sciences” was officially inaugurated on the island of Chios in cooperation with the “Maria Tsakos Foundation” – International Center for Maritime Research and Tradition and under the auspices of the Regional Authority of Chios-Northern Aegean. The Exhibition is part of the Educational Community and Public Awareness Campaign on the above mentioned themes, which is carried out with the support of Lloyd’s Register Foundation*.

Present at the opening event were the Vice Prefect of Chios Mr. St. Karmantzis, the Mayor of Chios Mr. M. Vournous, the local MP Mr. N. Mitarakis, the Commandant of the 96th Unit of the Greek Armed Forces Brigadier General Th. Grympiris, the Commander of the Chios Fire Brigade Mr. J. Archontakis, the Director of the Chios Hospital Dr. E. Voutierou, the Chairperson of the Shipping Dept. of the University of the Aegean Mrs. E. Thanopoulou, representatives of the Metropolitan Bishop of Chios, Oinousses and Psarra, the Port Captain of Chios, the Police Dept. of Chios, HELMEPA member-companies, Chairpersons and Directors of local entities and organizations, teachers and pupils.

Welcoming the guests, the Director of the “Maria Tsakos” Foundation Mr. Pavlos Kalogerakis expressed his sincere pleasure for the implementation by HELMEPA of these awareness raising activities in Chios with a special emphasis on schoolchildren, a main objective of the Founders. 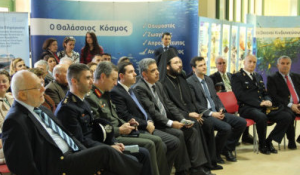 In presenting the initiative, HELMEPA’s Director General Mr. Dimitris Mitsatsos (big photo), referred to the Association’s close and long-standing ties with the island of Chios, homeland of the late George P. Livanos who conceived the idea of the founding of HELMEPA and a large number of member-seafarers and shipowners. This Exhibition, he continued, was first presented at the “Maria Tsakos” Foundation in 2011 to honor the memory of the late Maria P. Tsakos, General Secretary of the Board of HELMEPA and following it travelled to 20 other areas of Greece. There it was visited by 22,000 schoolchildren, while more than 750,000 local residents were informed about the Campaign. Closing, Mr. Mitsatsos thanked the Regional Authority of Chios for hosting the Exhibition at the “George Kaloutas” Center free of charge and the Directorates of Primary and Secondary Education of Chios for their contribution in the scheduling of the Campaign’s activities.

In their addresses, the Vice Prefect made reference to the seamanship of the people of Chios and the significance of such initiatives towards safeguarding natural resources, while the Mayor underlined that when children take advantage of such awareness raising activities the entire community benefits. Both officials thanked HELMEPA and Lloyd’s Register Foundation for including Chios in the Campaign. The local MP Mr. N. Mitarakis referred to the importance of environmental awareness as well as that of merchant shipping, which, as he said, constitutes a “lighthouse of hope” in the present crisis that our country is facing.

Honoring the 3,000 schoolchildren and 180 volunteer teachers of Chios that have participated since 1993 in the Association’s Junior Program, HELMEPA presented commemorative awards to the pupils of the Primary School of Volissos, who conducted the most environmental activities of the Program in Chios, and their teachers Ms E. Sezenia and Ms G. Sfyraki.

The Director General of HELMEPA presented a commemorative diploma to the Director of the “Maria Tsakos” Foundation in appreciation of its contribution towards the successful outcome of the Campaign in Chios and the event came to a close with a light buffet offered by HELMEPA to the guests.
The environmental Exhibition will be visited by approximately 1,200 pupils from 11 Primary Schools and 8 High Schools of the islands of Chios and Oinousses, with transport costs being covered by the Campaign. For the wider public, it will remain open daily from 1pm to 3pm.

Closing, as part of the Campaign a “Train-the-Trainer” Seminar for Teachers titled “The marine environment and us: ensuring a sustainable future” will take place on Wednesday 2 March in cooperation with the “Maria Tsakos” Foundation and the Directorates for Primary and Secondary Education of Chios, at the Foundation’s premises.